Viridum is an innovative and holistic revegetation system that can greenify both vertical and horizontal surface areas. Our system can be mounted on any kind of unutilized surface area. This makes the use cases endless: facades, rooftops, bus stops, noise-insulating walls, car parks, or concrete piers. There is nothing viridum cannot make green again. Thus, our system makes a valuable contribution to your city’s sustainability and attractiveness. 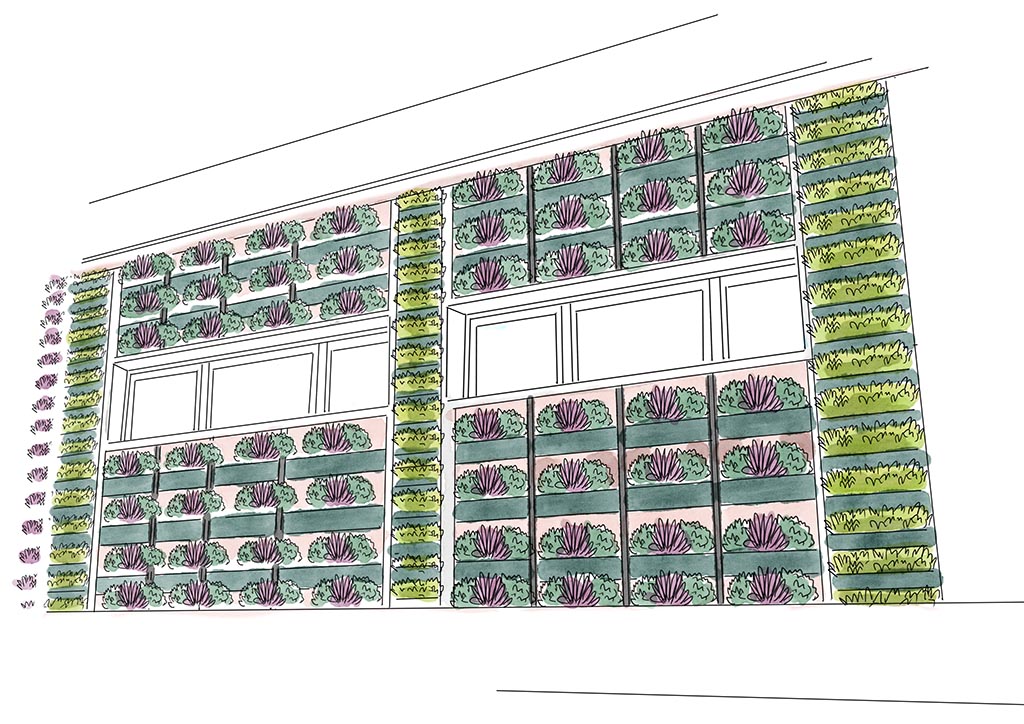 The revegetation of facades and rooftops of buildings creates a healthy and pleasant micro-climate where it is needed most: in homes and offices. Especially houses in densely built-up areas tend to heat up significantly on hot summer days. During the night, the surrounding air cannot cool down because the walls emit the stored energy again, which leads to the occurrence of tropical nights. Thanks to the evapotranspiration capacities of plants, viridum can cool down the air and reduce the number and the severity of tropical nights.
Buildings next to heavily trafficked streets have the additional disadvantage of being subject to immense noise pollution because the noise caused by traffic cannot escape the streets. Vertical revegetation systems can reduce the noise significantly because the plants keep the sound waves from being reflected. 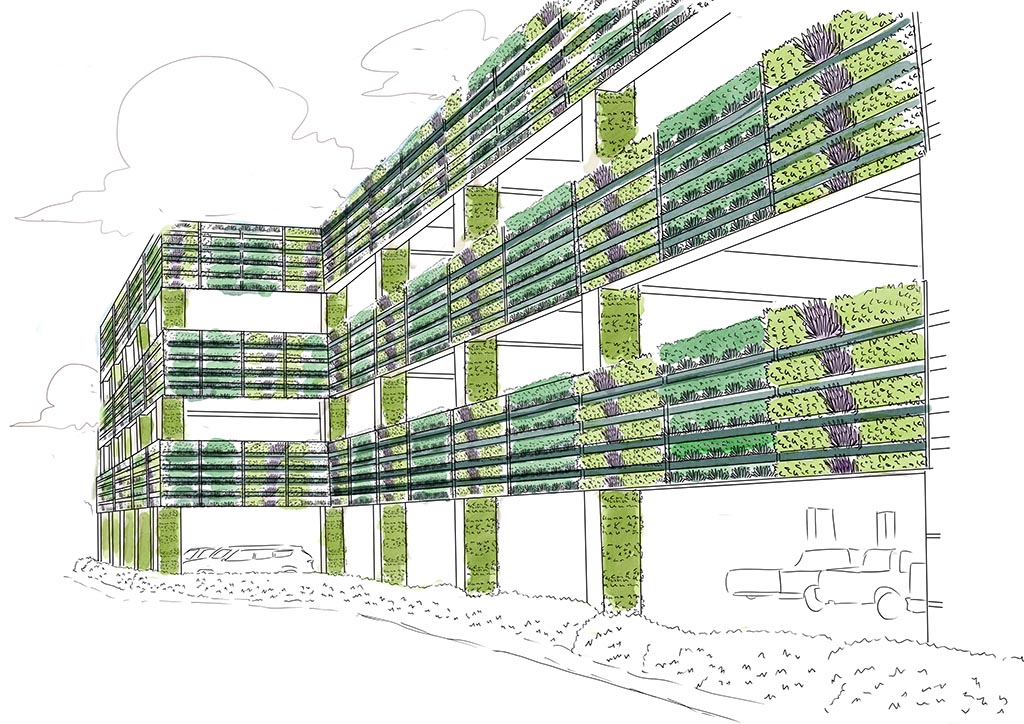 Parking lots and car parks are gray blotches in a city’s image. People don’t like using car parks because of their gloomy atmosphere. And huge parking lots are places with increased traffic, causing a great pollutant burden on the people using them. By using viridum, all of these problems can be solved at once: green walls on the outside and inside of car parks can make turn them into trustworthy places that people like to use. The construction of green room-dividers on public parking lots can reduce the pollution significantly. And both applications have the advantage of making an important contribution to a more beautiful cityscape. 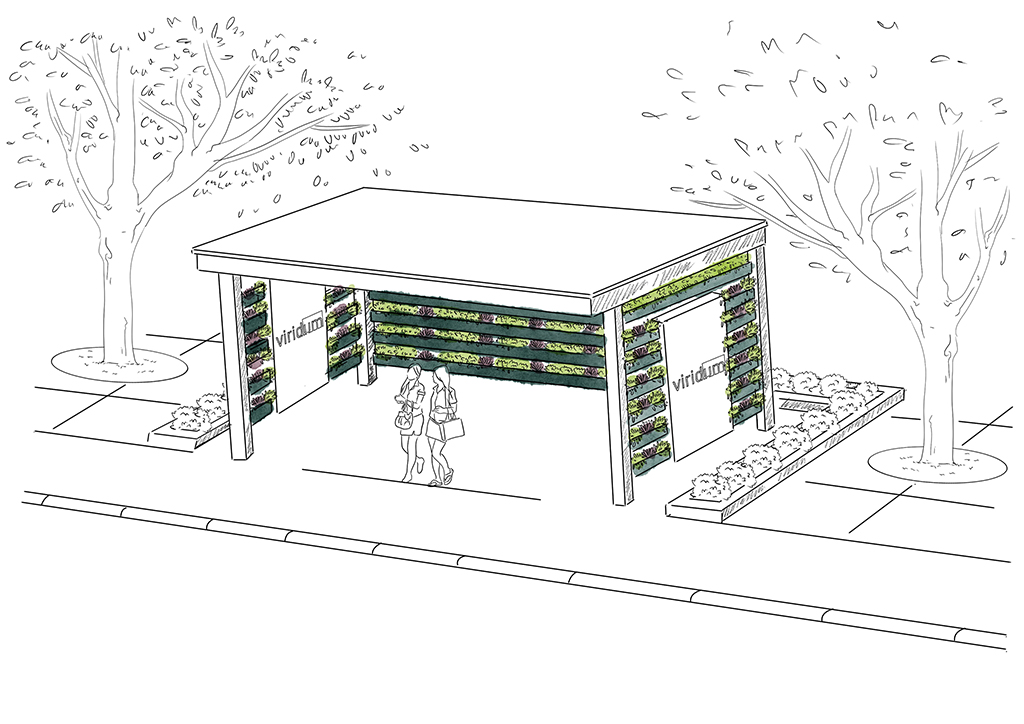 Bus stops are a ubiquitous element of every city. And while most of them fulfill their purpose on a basic level, there is still much room for improvement. For most users of public transportation, bus stops serve as shelters against rain or too much sun (well, that is, if the sunlight comes from the right angle). But nobody would think of bus stops as an oasis of calm or a place of beauty. However, this can be changed by mounting viridum on them. Greenified bus stops can become aesthetically-pleasing havens of tranquility where people do not mind having to wait 10 minutes for the next bus. 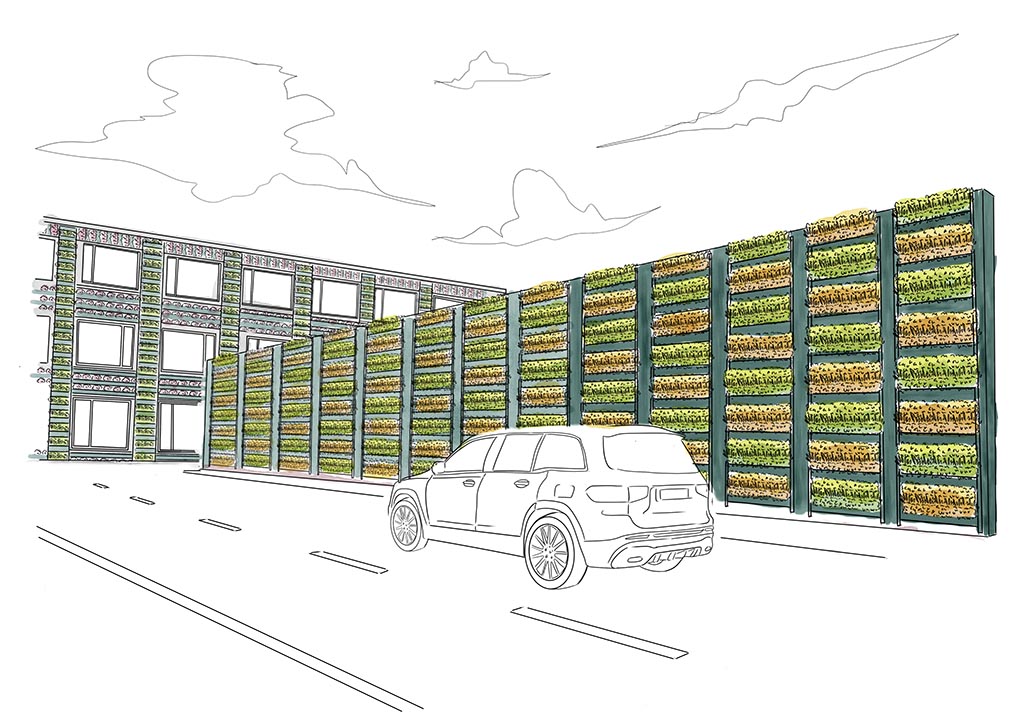 Conventional noise-insulating walls are very inefficient and do not contribute to the cityscape in a positive way. By mounting viridum on these walls, their full potential could be exploited. In addition to the insulation effect of the walls comes the insulation effect of the plants, which keep the sound waves from being reflected on the walls. The positive effects of viridum do not stop there. Usually, noise-insulating walls are placed at highly trafficked streets, such as motorways. There, viridum’s second benefit comes into play by reducing the levels of pollution caused by the traffic. And finally, noise-insulating walls equipped with viridum become living walls that have a positive influence on the cityscape. 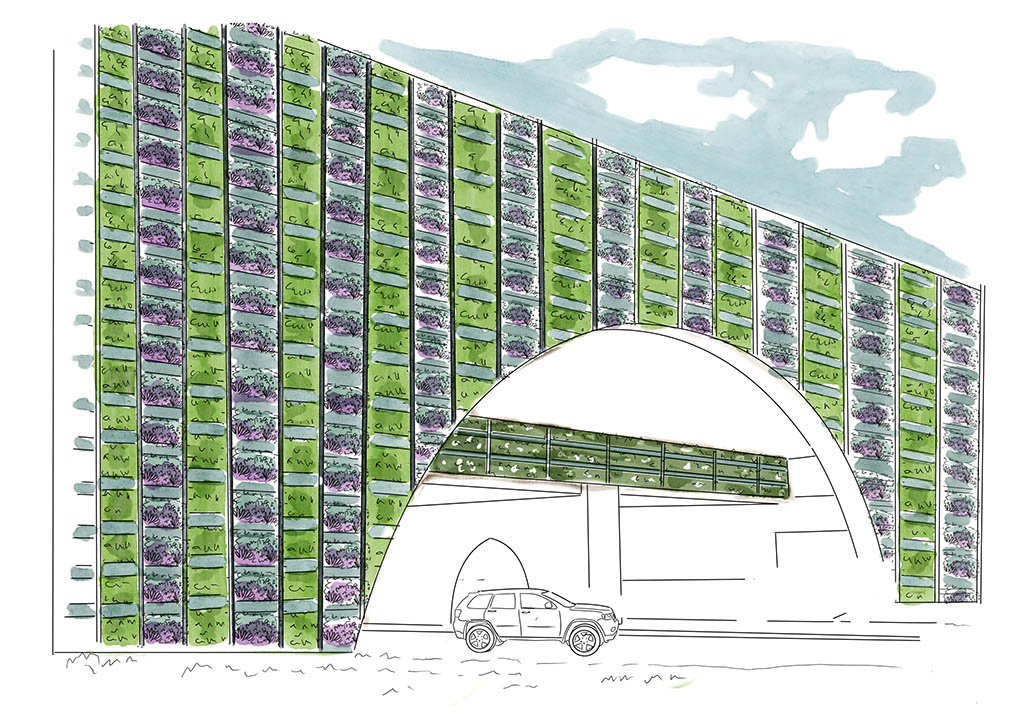 Concrete surfaces, such as piers or walls, do not have any kind of aesthetic value. On the contrary, their shades of gray reduce the attractivity of each and every city, especially when they are displaying graffiti. Luckily, these surfaces can be improved by mounting viridum on them. Thus, these previously underutilized objects become aesthetically-pleasing elements of urban areas. In addition to that, viridum can protect the structure of buildings and other objects by sheltering them from direct sunlight, extreme temperatures, rain, and other forms of erosion. This is especially important for concrete piers that have to carry an enormous load.